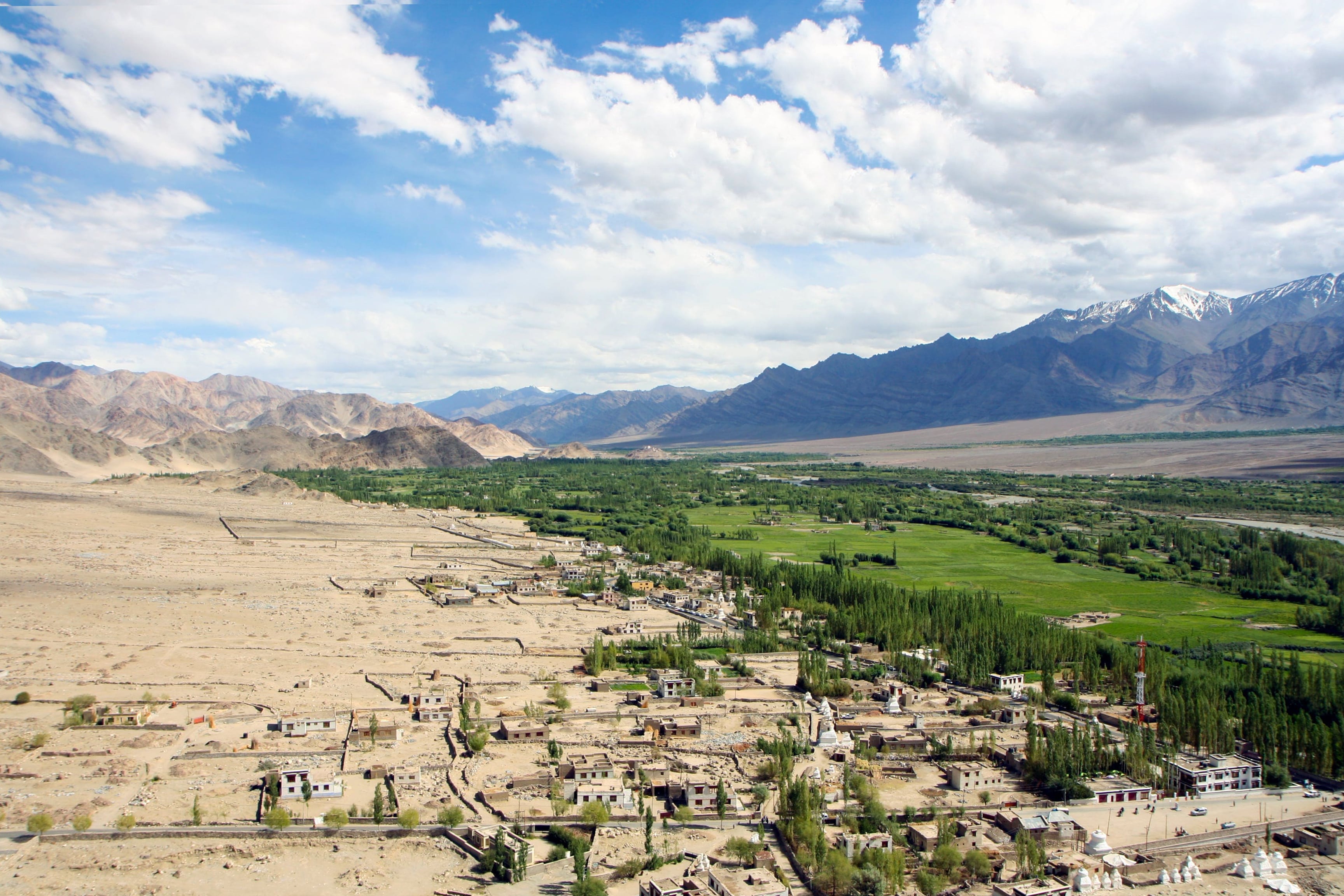 The journey starts from Leh, once the important halt for the Caravan of silk route. You will discover some of prominent Buddhist monasteries along the Indus valley, nature beauty of barren landscape dotted by oasis, Khardungala pass, claimed the highest motorable pass of the world is the gate way to Siachen glacier. Magnetic hill and Gurudwara Pathar Sahib are another attraction of this trip.

Take your flight to Leh, on board enjoy the view of majestic Himalayas. You will be landing at 3500m from the sea level. On arrival at Leh airport you will take the taxi to the designated hotel.  You will relax till the mid-day. Meeting with our representative and guide on lunch time. After lunch to get acclimatize leave for excursion to Shanti Stupa dominate the Leh town, Royal Palace built by 5th Dalai lama in 17th century which looks like a little Potala of Lahasa. Stroll in the Bazar and night in the hotel.

Day 2: Monasteries of Indus valley (around Leh)
Leave early to visit most famous monasteries of Indus valley. Visit Thiksey a majestic monastery perched on a rocky outcrop built in the 15th century during the first wave of expansion of Gelugpa sect in Ladakh. At the entrance, there are painting of protective deities and the great masters of the sect.

Hemis Monastery: Hemis Gompa is established in 1620 by Lama Tagstang Raspa and built by Palden Sara under the patronage of King Singe Namgyal. Its mural painting represents the different divinities dated back to 18th sanctuary and belongs to the Drukpa sect of Buddhism.

End of the day visit Shey monastery, once the capital of Upper Ladakh before being supplanted by Leh, monastery houses rich murals painting, well restored and represents the 18 Arhats (disciples of Buddha who attained enlightenment). back to Leh by evening. Night in hotel.

Day 3: Leh – Khardungla Pass – Leh (148 kms/ 6-7 Hrs)
Morning leave to Khardungala pass, the gate way to the valley of N ubra and further to Siachin glacier. Part of road is well maintained and part is dirt, occasional rivulet can increase the flow due to high melting rate of snow in summer. Pass is claimed one of the highest motorable road of the world elevating around 5600m. Once on the top of pass, you will enjoy the breathtaking view of Nubra valley, Karakoram and Himalayan mountain ranges. Due to altitude visitors are advised to not remain long at pass, hence respect the protocol applied by the authority. Once you enjoy the view, drive back to Leh, Rest of the time at leisure. Night in hotel

Day 5: Leh – Alchi – Lamayuru (125 kms/ 3-4 Hrs)
Now from Leh the next site to visit is Alchi monastery. It is the oldest monastery of Ladakh. Alchi , visit Monastery . Among the many temples, caves and Stupas built in Ladakh Alchi, Choskor is the largest and the most famous of all of them, built by Rinchen Zangpo ablout 990 years ago. Monastery houses valuable mural painting and Thankas.

Leave towards Lamayuru, one of the ancient monasteries magnificently perched on the hill. Before Buddhism penetrated in the region this site was known as a Centre for bon religion. Stroll around the monastery campus and admire the stunning beauty of landscape, night in a simple hotel.

Day 6: Lamayuru – Leh (115 kms/ 3 Hrs)
Morning after leisurely breakfast walk around the monastery and drive back to Leh, On the way stop at the point to admire the view of the moon valley (lunar scape). Afternoon reach Leh, rest of the time is at leisure. night in hotel.

Day 7: Depart from Leh
After breakfast get transferred to Leh airport to board flight back toward your destination. Journey ends with Sweet memories of Ladakh.

All booking for the tours /treks are made with Himalayan Frontiers, herein after referred to as ‘the company’ and are subject to the conditions:

the person signing the booking form accepts the conditions and is hereafter referred to as the client.

The Company cannot be made liable for the consequences of weather condition, flight cancellations, war or threat of civil war, strikes, industrial action, political unrest or any other force majeure, unusual or unforeseen circumstance. The company reserves the right to use alternate transport, or vary the itinerary if breakdown, sickness or any other force major. Any additional that result, such as extra hotel accommodation, flight or road transport will be on your charge and must be paid directly at the spot.

Please understand, there are certain hazards involved in your adventurous and culture holidays which you must accept at your own risk. The company will not be liable for any illness major or minor injury, death sustained during neither the trip, nor it will be liable for any uninsured losses of your property and other losses during the trip.

This is mandatory for all clients travelling on any tour/ trek or independent itinerary arranged by us. You are responsible for obtaining adequate insurance covering expenses of unexpected as mentioned in liability paragraph. the loss of baggage, medical expenses, helicopter (air or ground) rescue, injury, death, repatriation, cancellation and curtailment of the itinerary.

*It is strongly advised that clients take out insurance to cover the unexpected and cancellation charges.

No refund will be made for any unused services included in the tour / trek cost. No refund will be payable to any client who voluntarily or obliged to leaves a trip enroute, clients are responsible to bare their own expenses, expenses of such as escort, transport, hotels and other related services occurred due to such circumstances.

Client agree to accept the authority and the decision of the tour/ trek leader or escort appointed by the company whilst on tour with the company. If in the opinion of the tour/ trek leader, any client’s behavior is detrimental to the safety, welfare or harmonious state of the group as a whole, the client may be asked to leave the tour / trek without any right of refund and all extra expenses caused will be on his/her charge.

40% of total programme cost should be deposited in advance for booking.

Balance payment should be made at least 7 days before the tour begins.

The amount paid once is not-transferable to any other programme/tour or to any other individual(s)/group or for any other service.

No refund shall be made if participant(s) drop/terminate from program at any point due to any reason.

One has to take care of his/her individual luggage.

The organisers or any individual connected with the tour shall not be held responsible of any accident or any unforeseen natural calamity.

Bank charges has to be paid by the Client.