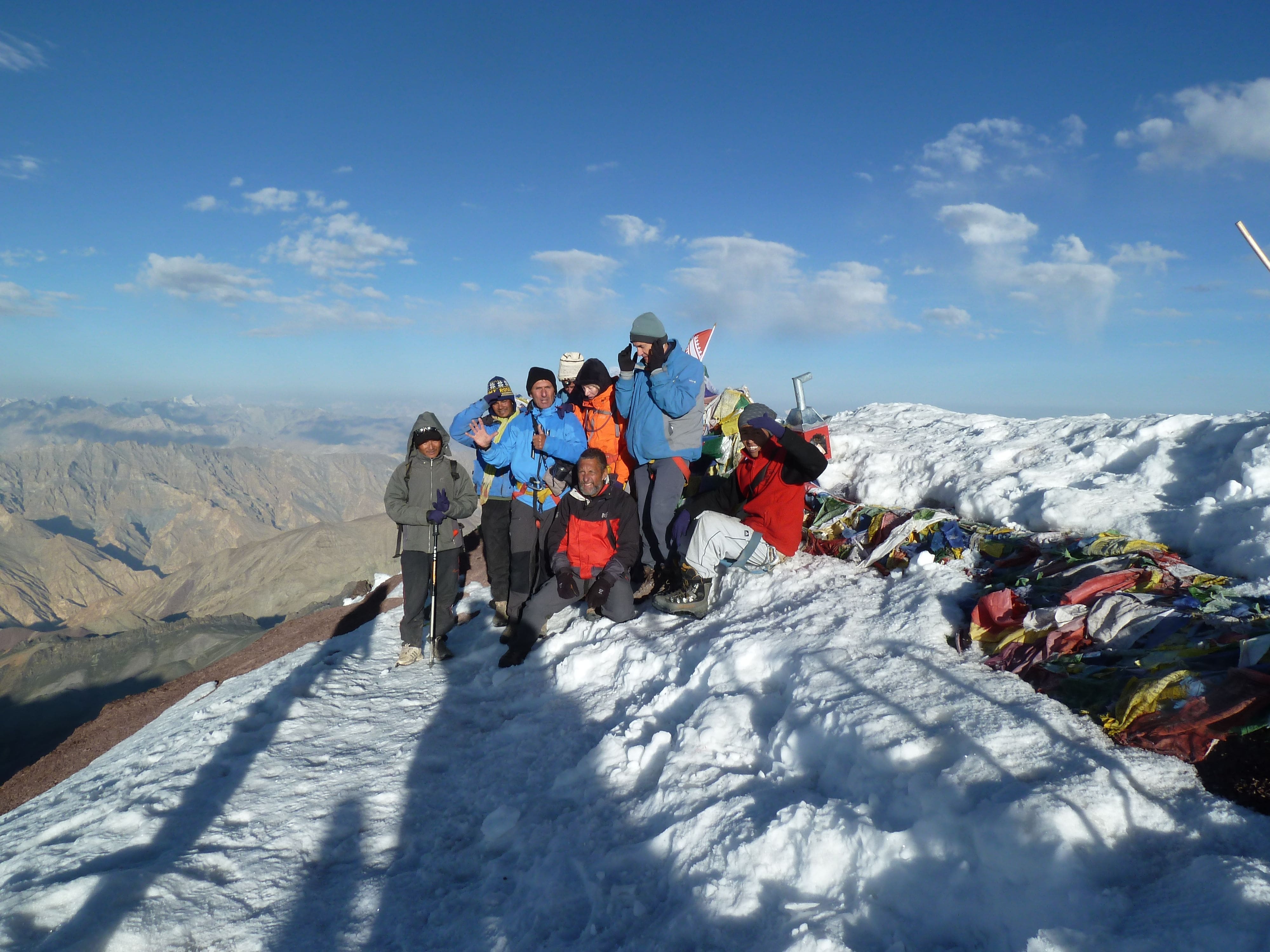 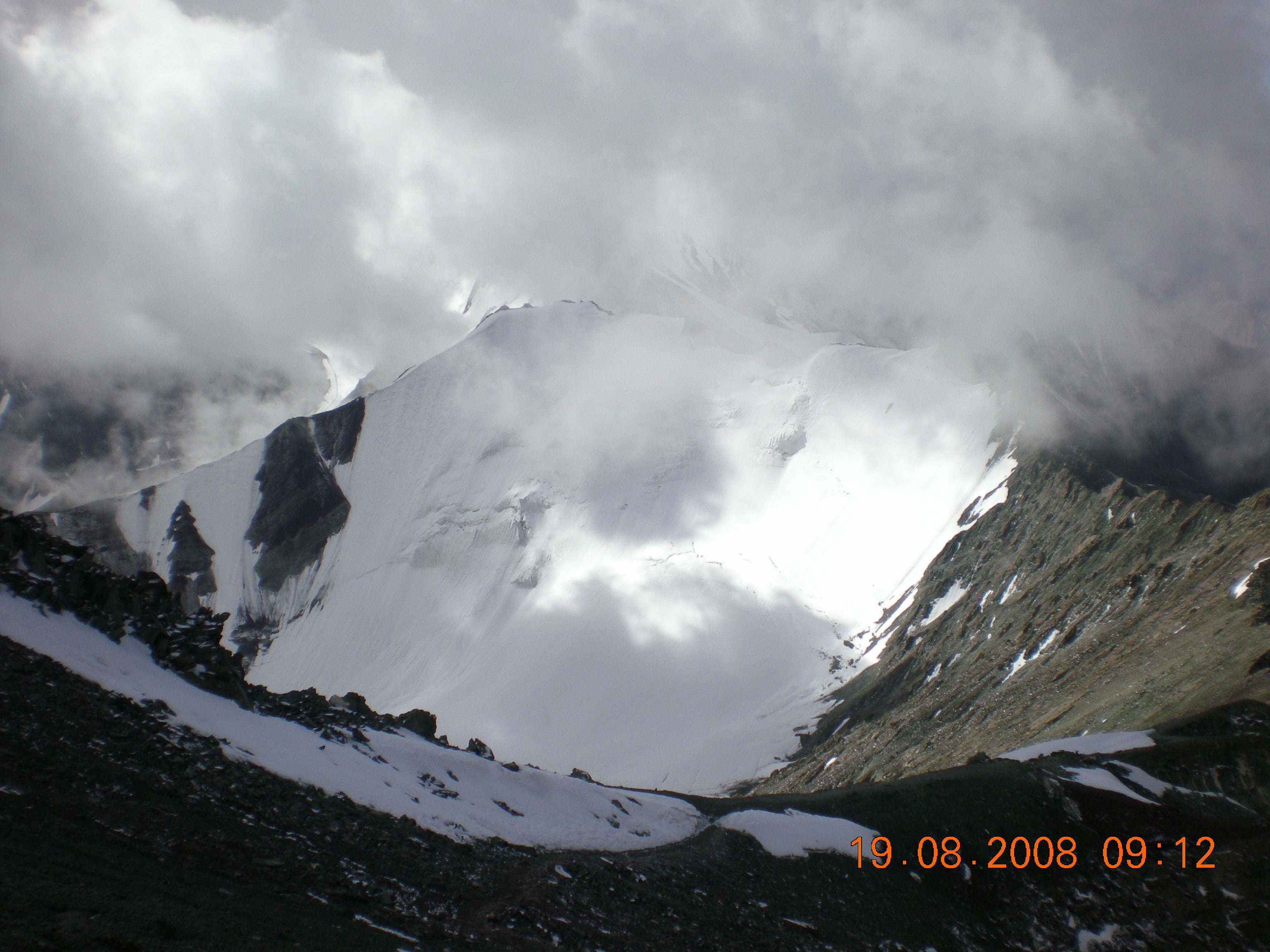 Stok Kangri is one of the classic expeditions of Ladakh, which is a combination of trek and adventurous thrill towards the summit.

Stok Kangri (6153 m) literally means" the high mountain" in Ladakh. It is visible from the main city of Ladakh, Leh. It is located in the National park of Hemis. Although the summit seems difficult to climb but technically it is not. It requires a good physical and mental fitness, with a little knowledge of the mountain and some necessary equipment.

The objective of climbing this peak is to achieve 6 000 m in Himalayas. At your arrival in Leh, the capital of Ladakh, its hurt pyramid will catch your eyes. Its south fish bone (edge) presents a magnificent route, with panoramic views all around the chain of Karakoram.

10 hours for the round trip are needed. According to the climatic conditions and of snow coverage, our guide will fix a rope to cross the bar of snow, if the snow is little, it will be by the rock hooks. If you are an experimented mountain dweller, it will not be necessary to fix the rope.

Day 6: Alternative day to climb, or stroll around. Explore base area or second attempt to climb, Trek+ climb 4

Day 1: Take your flight to Leh, On board enjoy the view of majestic Himalayas. You will be landing at 3500m from the sea level. On arrival at Leh airport our representative will transfer you to the hotel. To get acclimatized, you will relax till the mid-day and leave for excursion after the lunch in the hotel. Walk to Shanti Stupa dominate the Leh town, Royal Palace built by 5th Dalailama in 17th century which looks like a little Potala of Lahasa. Stroll in the Bazzar and night in the hotel.

Day 2: Acclimatisation visit to monasteries of Thiksey, Hemis and Shey,
Visit the monastery of Thiksey, a majestic monastery perched on a rocky outcrop built in the 15th century during the first wave of expansion of Gelugpa sect in Ladakh. There are paintings of protective deities and the great masters of the sect at the entrance.

Shey, once the capital of Upper Ladakh has a monastery which housing rich murals painting, well restored and represent the 18 arhats (disciples of Buddha who attained enlightenment).

Visit monastery of Thiksey, A majestic monastery perched on a rocky outcrop built in the 15th century during the first wave of expansion of Gelugpa sect in Ladakh.

Visit Hemis monastery. A mass of splendid architecture on a green hill has been built by the inveterate royal architect Singe Namgyal in1630. The monastery belongs to Drukpa sect of Buddhism, site is privileged for Namgyal dynasty. Its mural painting represents the different divinities dated back to 18th sanctuary. There is a huge Thanka reputed to be the Largest in its existence which is exhibited once in every twelve years, afternoon free at Leh; night in the hotel.

Day 3: Leh to Stok and trek to Changma 4400m. 5/6h, Trek 1
Drive to Stok, visit Stok Palace and museum inside contain the antic object. Your adventure starts here. Uphill trek in the barren land of Ladakh, amidst multicolour hue, you will be wade the mountain streams, and will enjoy the breath-taking view of Ladakh. Night in camp.

Day 4: Changm - Base camp of Stok (4990 m), trek 2
Today is hard ascent in the morning to cross the last pass, the Matho- La. One can have the magnificent view of Stok Kangri and whole route of ascent from here. We are in the valley which links the village of Stok with the base camp of the same name. We find here villagers coming and making their herds of yaks graze. Night in the tent.

Day 5: Climbing Stok Kangri (6130 m): Trek + climb 3
One can climb directly from Lower Base Camp or shift camp to the Higher Base Camp. Get up at 2 am, you should have prepared your daypack and necessary equipment the previous night, before going to sleep. Have a light snack in the morning before starting off for the Big Climb! First, there is a diagonal ascent up the moraine of the glacier, and then a short scramble over the glacier itself. After that, climb up the steep, zigzagging trail to the summit. The view from the pinnacle at sunrise is mind-blowing.

According to the condition of the route, our guide will fix the climbing rope either in rock or in snow, with rock pitons or snow stakes as required and other equipment necessary to secure the rope.

Day 6: Alternative day to climb, Climb or stroll around. Explore base area or second attempt to climb 4

Day 7: Base camp of Stok (4990 m) - Leh, trek 5
Take an easy descent, after descending little more, we find the river which originates from the glacier of the Stok-Kangri. Continue a long but pleasant descend until Stok. We have some time to visit the royal palace of Stok and admire objects of exposition there. Royal Palace was Built in 1825 by king Tsepal Tezndup Namgyal, inhabited by the descendants of a former royal Ladakhi dynasty. Visit the village and return to Leh in Jeep; night in a hotel.

Day 8: Leh to Delhi.
Transfer to the domestic airport of Leh as per flight schedule. End of services.

How to reach Leh

By air: There are daily flight to Leh from Delhi, on arrival our representative will pick you up and will drop at respected hotel.

Briefing of the trip: Briefing of trip will start after lunch on day of arrival, every participant is requested to be on time.  Those missing the briefing will be not repeated for those late arrival.  Afternoon you will take acclimatization walk to Shanti Stupa and Leh palace.

No Show of participant

Those who could not reach till evening on reporting day will be considered no show. No show of participant will enforce Himalayan Frontiers to either postponed the trip (if seat and trip available) or cancel their booking. Those who considered non- shown please consult the terms and condition policies applied by company.

To book a trip

To book an expedition/ trek / tour complete and sign the booking form and post or mail to the company with your deposit of 30% of the total amount by bank transfer or by payment Online through the site: www.himalayanfrontiers.com. Acceptance of the clients booking will be confirmed in written. The balance is to be paid 30 days before the scheduled departure.

All the cancellation must be in written and signed by the person who signed the booking form and will be effective from the date of the reception by the company.

30 days or more before departure: The agency will refund the entire paid amount to his client deducting the registration fee (INR 3000rs per persons or equivalent in other currency), GST paid at the time of booking and bank charges subject to the bank policies.

29 to15 Days before departure: The agency will refund the 50% of paid amount to his client deducting the registration fee (INR 3000rs per persons or equivalent in other currency), GST paid at the time of booking and bank charges subject to the bank policies.

Less than 14 days before departure: The agency will be obliged to withhold the full amount of the deposit paid by the customer. In this case, the customer must inform their insurance as soon as possible and provide as much documentation to support the cancellation of trip. It is therefore strongly advised to take out cancellation insurance to cover such expenses.

Those who cancel their trip, following the terms and conditions norms as per the time period we will refund the advance or full payment made to book the trip by deducting the applicable taxes as of GST, bank charges, file charges and other applicable taxes and charges. For foreign client’s differences of currency buying has to be borne as per the present exchange rates.

For foreign nation participants additional charges will be add on to buy the foreign currency, (hence buying the currency charges has to be borne by clients) bank transfer (wire transfer) charges and other administrative paperwork to be completed which is quite long exhausted process, we request you to understand and co-operate with. We will do our best possible to deal such cases respecting the present circumstances.

The Company cannot be made liable for the consequences of weather condition, cancellations of flight / train or bus, war or threat of civil war, strikes, industrial action, political unrest or any other force majeure, unusual or unforeseen circumstance. The company reserves the right to use alternate transport, or vary the itinerary if breakdown, sickness or any other force major. Any additional that result, such as extra hotel accommodation, flight or road transport will be on your charge and must be paid directly at the spot.

Please understand, there are certain hazards involved in your adventurous holidays which you must accept at your own risk. The company will not be liable for any illness major or minor injury, death sustained during neither the trip, nor it will be liable for any uninsured losses of your property and other losses during the trip.

This is mandatory for all clients travelling on any tour/ trek / expedition or independent itinerary arranged by us. You are responsible for obtaining adequate insurance covering expenses of unexpected / unforeseen circumstances as mentioned in liability paragraph, such loss or damage of baggage, medical expenses, war or threat of civil war, strikes, industrial action, political unrest or any other force majeure, unusual or unforeseen circumstance, helicopter (air or ground) rescue, injury, death, repatriation, cancellation and curtailment of the itinerary.

What you should pack for short Stok Kangari expedition